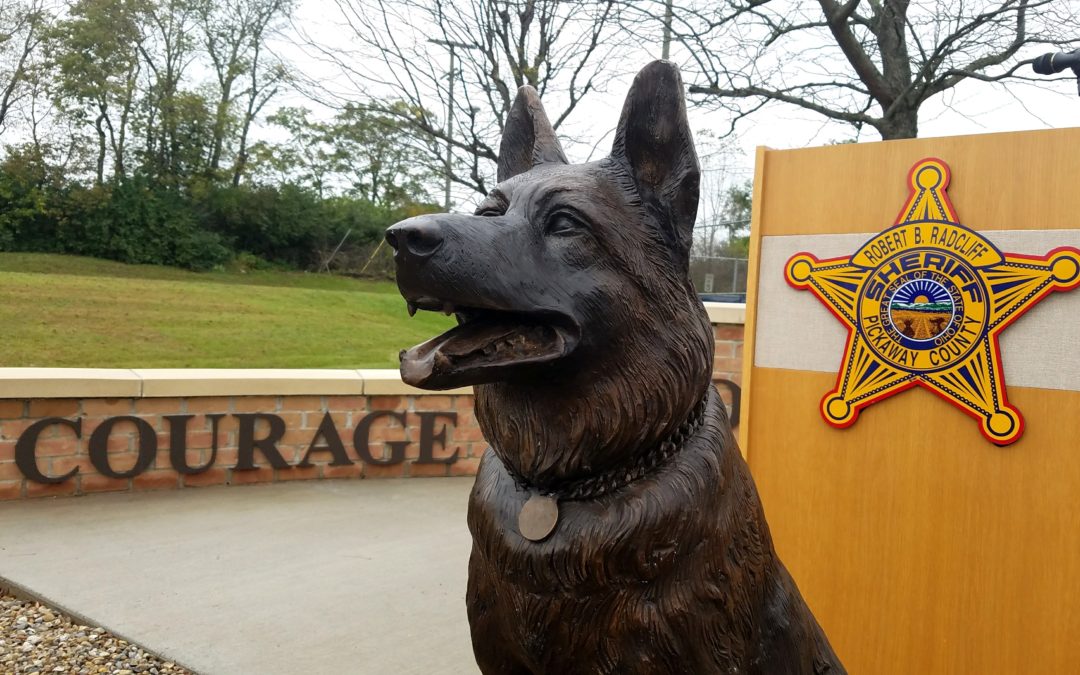 It was a drizzling October afternoon and I had absolutely no idea what I was in for. DāNite Sign Co. had recently made a K9 Memorial contribution of stud-mounted dimensional letters reading “Courage, Loyalty, Service, and Honor” to the Pickaway County Sheriff’s Office. DāNite owner Tim McCord, a dog lover at heart, was approached for the donation by his friend Paul Johnson of Four J Properties. Paul designed and co-organized the K9 Memorial. As the Project Manager charged with managing DāNite’s contribution, I attended the dedication ceremony. 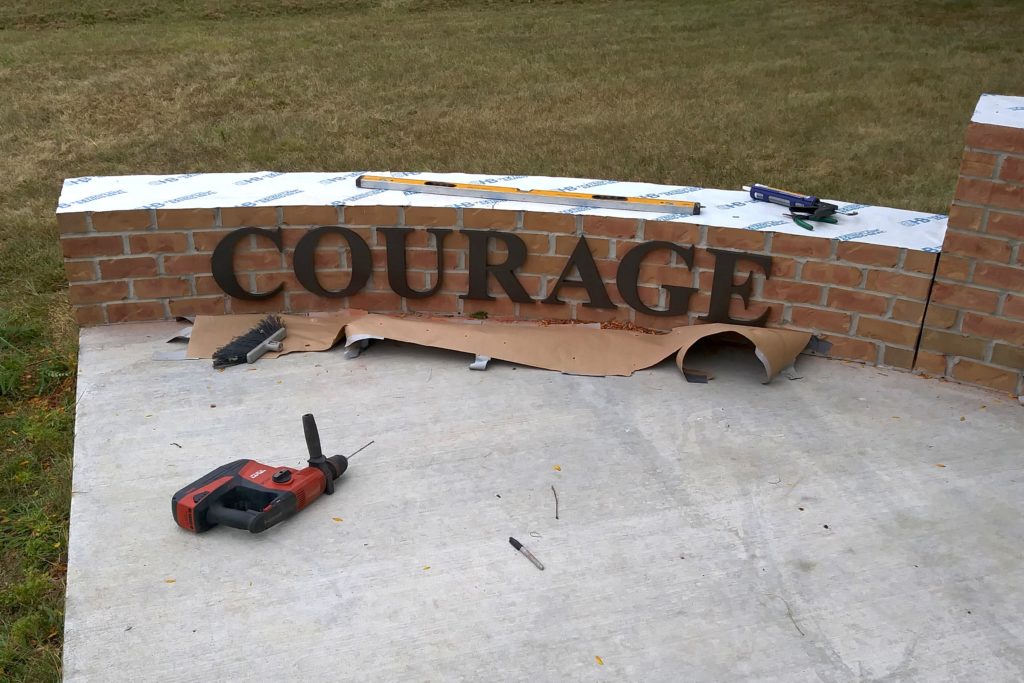 During the half hour drive from Columbus to Circleville it never occurred to me that I might shed a few sympathetic tears that afternoon. But the event was also to be a special service for a young police dog and beloved family member named Aron who had unexpectedly passed away in June. Aron’s ashes would be the first to be interred at the new memorial.

On-duty K9 officers in body armor, the AMVETS honor guard, a group wearing embroidered vests reading S.A.L.T. Seniors and Lawmen Together, civilian umbrella-toting friends and family of all ages, and donation representatives like myself sat in rows of wood folding chairs, or stood in a crowded semi-circle around a podium at the new K9 Memorial. Roughly 80 people in total would witness the touching service, fit for any departed police officer. 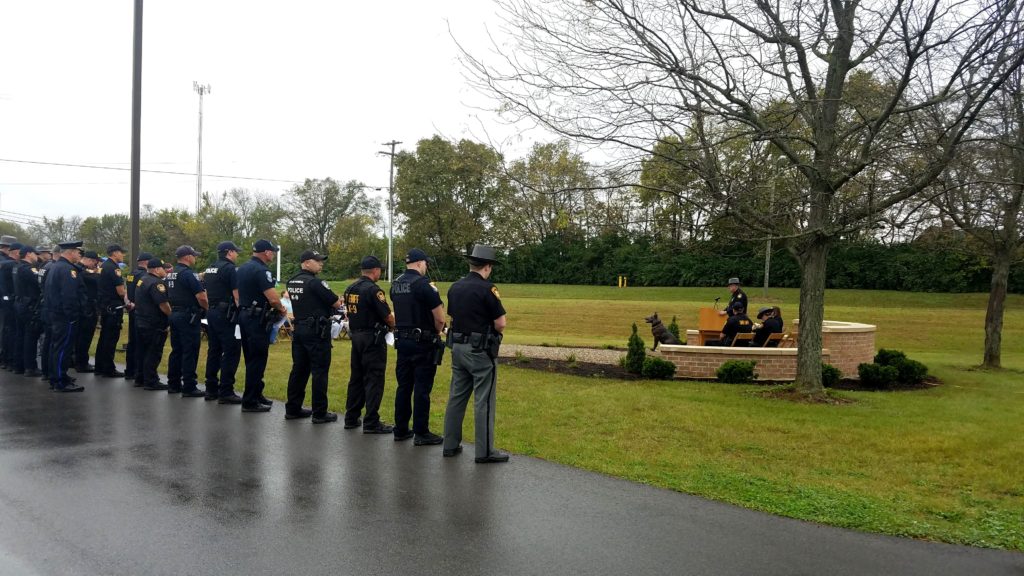 Holding a decorative box of ashes, Aron’s handler, Deputy Steven Harger, remembered the 110 lb canine as a “Hercules of a dog”. He reminisced, “Aron was bullheaded, much like me as some of you would agree. Aron knew he was big and strong, and he challenged me with his strength on a daily basis. Many handlers say the training with their K9s keeps the dogs sharp, but it was Aron that kept me sharp and challenged me to always be my best. I was so proud of him. His mere presence demanded respect and attention.”

Aron went home with Deputy Harger each day to be a family dog once the work day was done. He had a “work mode and a home mode”. Harger related that “Aron knew when I was in uniform it was time to go to work, and he also knew that when we were home it was time to rest and relax.” Aron (pronounced ā-ron) is credited with being responsible for the largest methamphetamine bust in Pickaway County history. The drugs had a street value of around $15,000. 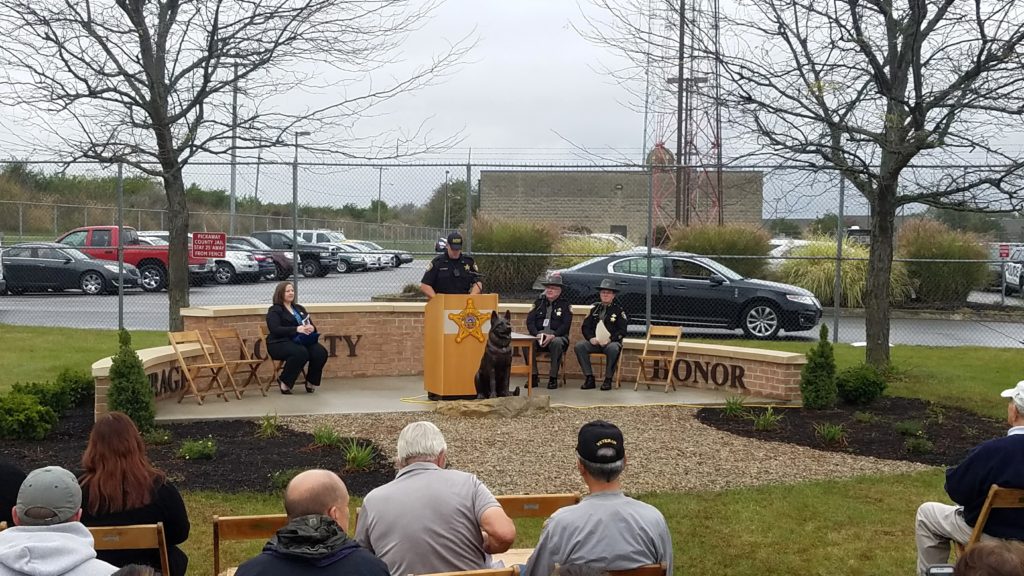 Deputy Harger said, “He was a great friend, a great partner, and family member. I think about him daily, and I know his legacy will continue. It continues with me, my new partner, and with every successful seizure that takes place in this county.”

Chaplain Ronald Reese read from the sixth chapter if Isaiah and compared the verse “Here am I, send me,” with the consistent attitude of police dogs everywhere. “Under the most difficult situations when the deputies are on the scene in the most dangerous, risky calls that must be attended to, it is often where the K9 is looked to,” he said. “If they could speak, they’d say, ‘Here am I, send me.’ If there was ever a friend to a deputy, it was his dog that is out there with him and who would indeed lay down his life for him.”

Pickaway County Sheriff Robert Radcliff explained that Aron had served for around six months as a narcotics dog, helping to keep drugs off the streets of Pickaway County. Aron passed away unexpectedly from health issues. Sheriff Radcliff thanked the community and approximately 36 organizations who contributed time, effort, materials, and funds to making the $12,000 K9 Memorial a reality. He noted that the memorial will honor and serve as a final resting place for all the deputy dogs of Pickaway County and that none of the funds came from tax payer money. Everything was donated.

To wrap up Aron’s memorial service, a 21-gun salute was sounded by the AMVETS Post 2256 Honor Guard and taps was played. The somber sounds of “Amazing Grace” filled the air as a kilted member of the Franklin County S.O. Pipe & Drum Corp. played the bagpipes and slowly strolled off down the long drive. Adults and children who had known and loved Aron left flowers at the cast bronze paws of a full sized German Shepherd sculpture, the centerpiece of the memorial. Everyone was moved. 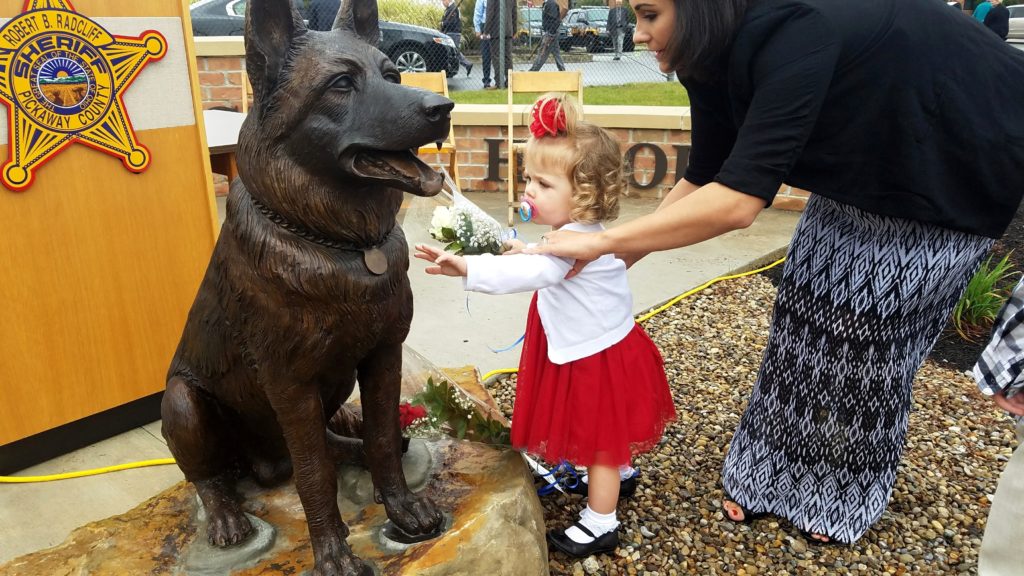 Paul Johnson, a former commercial/industrial contractor for over 25 years, co-coordinated the project with Melissa Tootle of the Pickaway County Sheriff’s Department. Paul stated, “Like several others involved in this project, I am a volunteer and am very honored to do it in support of our outstanding Sheriff department.” 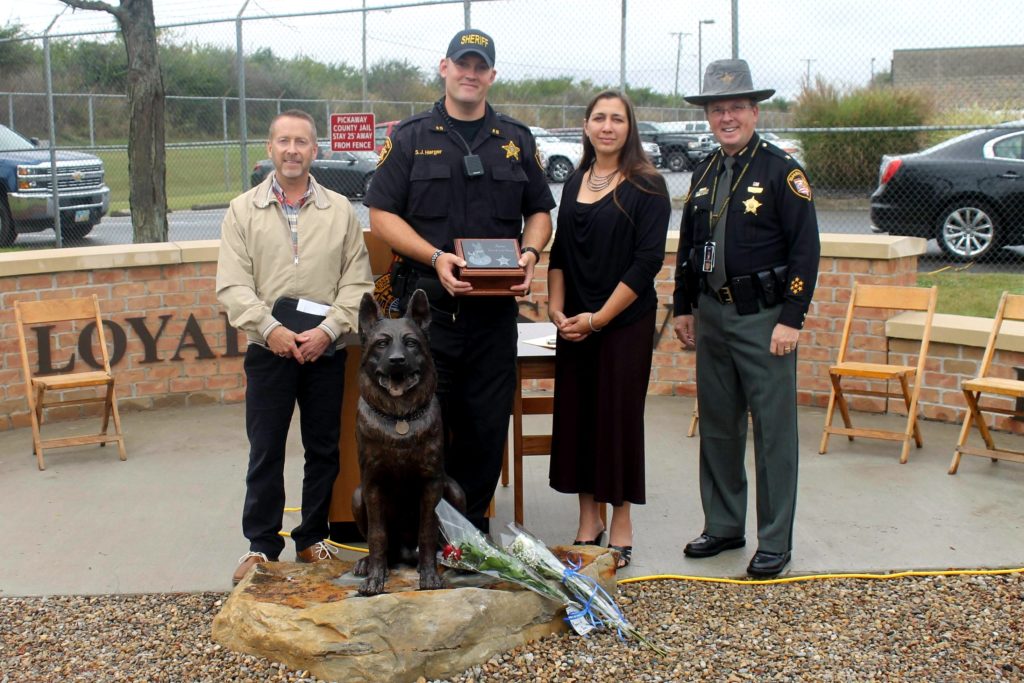 Paul Johnson listed some of the donating parties involved with the K9 Memorial: 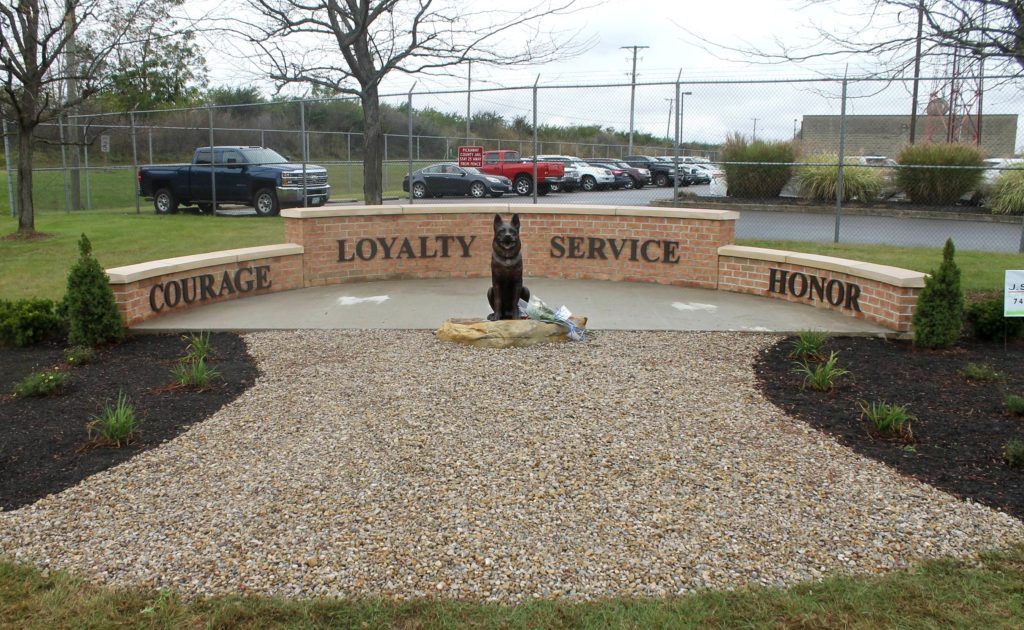 DāNite Sign Company is proud to be a part of this worthy endeavor, and moved by the dedication and sacrifice shown by law enforcement officers and their K9 partners everywhere. 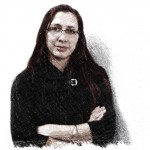