A make-shift classroom was created for a short presentation before students participating in ISA’s Sign Manufacturing Day get a tour of DaNite’s shop. Nate Kellett & Sean Clark review their upcoming contributions, while Sales Manager Scott Allomong describes the admin side of signage.

Everyone loves a good field trip. According to the International Sign Association (ISA), “Some 3,700 students of all ages visited sign, graphics, and visual communications companies as part of Sign Manufacturing Day 2017. The event is sponsored annually by the International Sign Association and the National Association of Manufacturers. This year, at least 68 locations opened their doors to students throughout the U.S. and Canada. 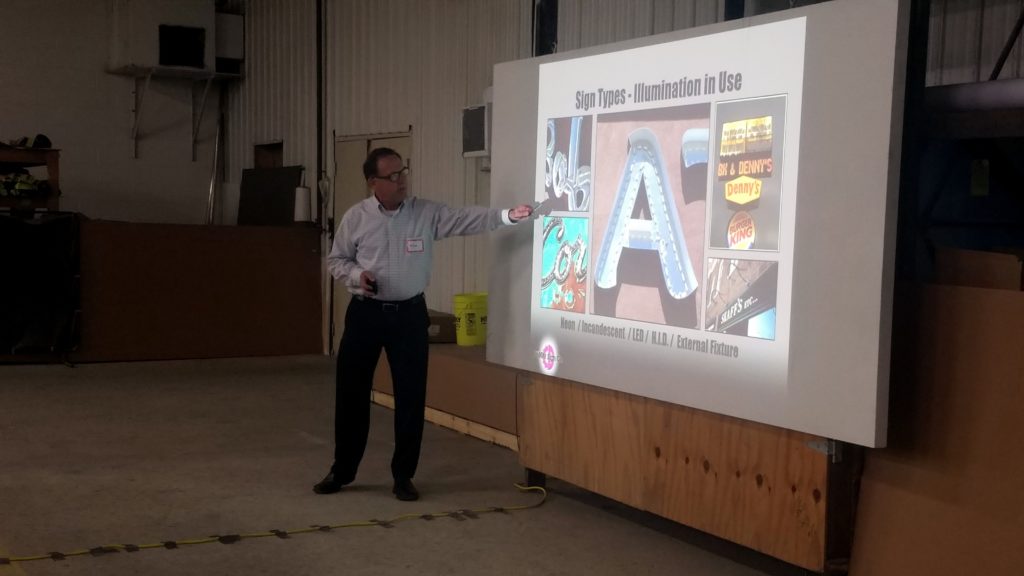 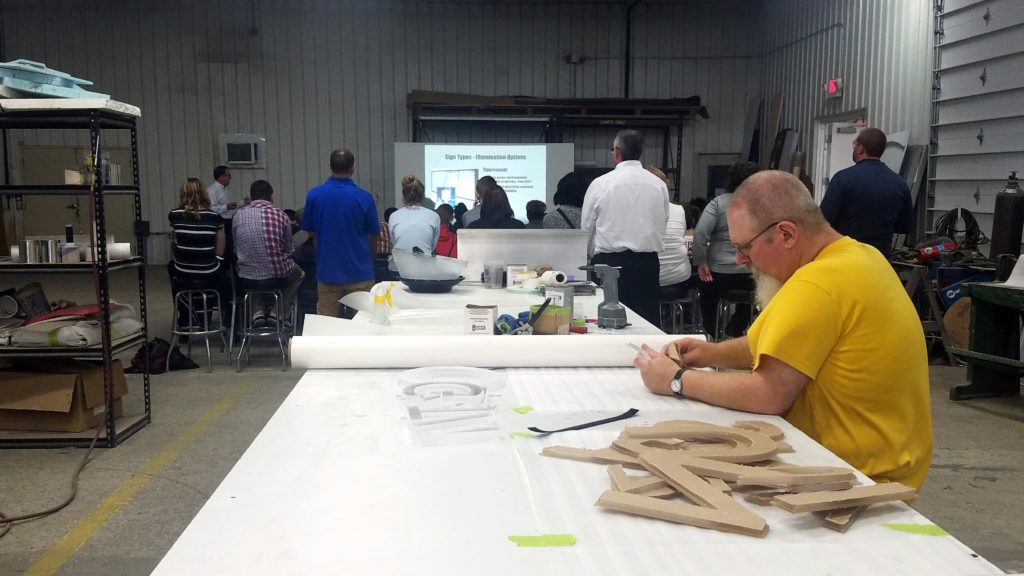 Lonnie works to assemble push-thru letters in the background during the presentation.

Students from the Central Crossing High School, Grove City HS, Franklin Heights HS, Westland HS, and the Southwestern Career Academy got to tour DāNite’s 33,000 sq ft facility during Sign Manufacturing Day. They saw examples of the diverse variety in trades required for the production a single sign. From administrative and sales staff, estimators, graphic designers, engineers, metal fabricators, welders, electricians, painters, printers, crane operators, service techs, and helpers, it takes all sorts of skilled tradesmen and women. They work together towards a common goal of excellence to produce each and every sign. Many students claimed that the filed trip was an eye opening experience and expressed interest in pursuing a career in the sign industry. 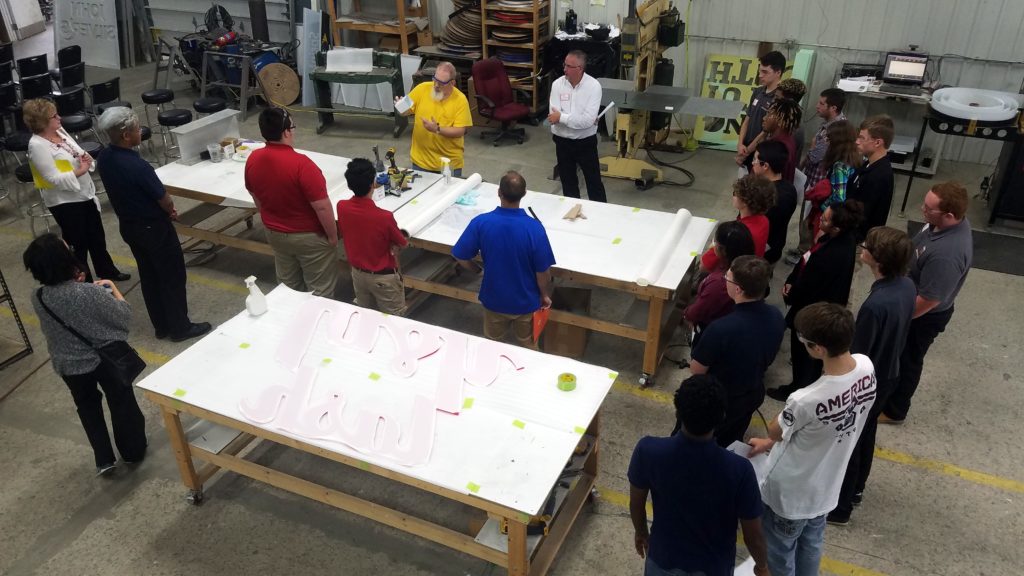 Students gather round while Lonnie gives a quick overview of how channel letters are made. 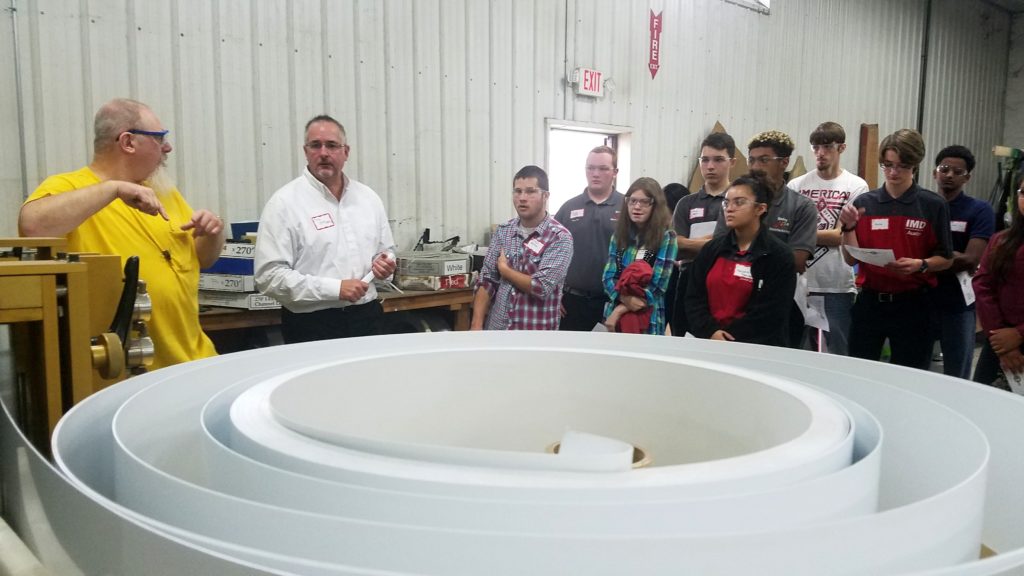 A demonstration of the channel-coil machine pre-forming channel letters is always a highlight of the tour. 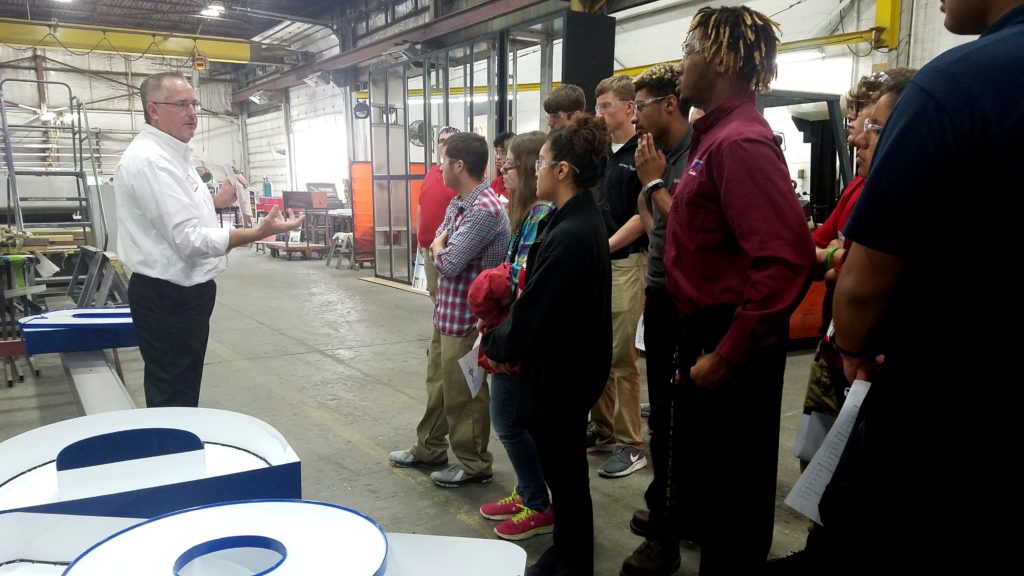 Tim McCord describes the pros and cons of putting channel letters on a raceway, and why there is a necessity for each of these mounting techniques.

In a 2016 press release, Lori Anderson, ISA president and CEO states,  “We’ve seen companies make hires as a direct result of participation in previous Sign Manufacturing Day events. This program, and the ongoing relationship that it affords participants to develop with local community colleges, technical schools and high schools, will go a long way toward addressing the challenge of finding skilled workers.” 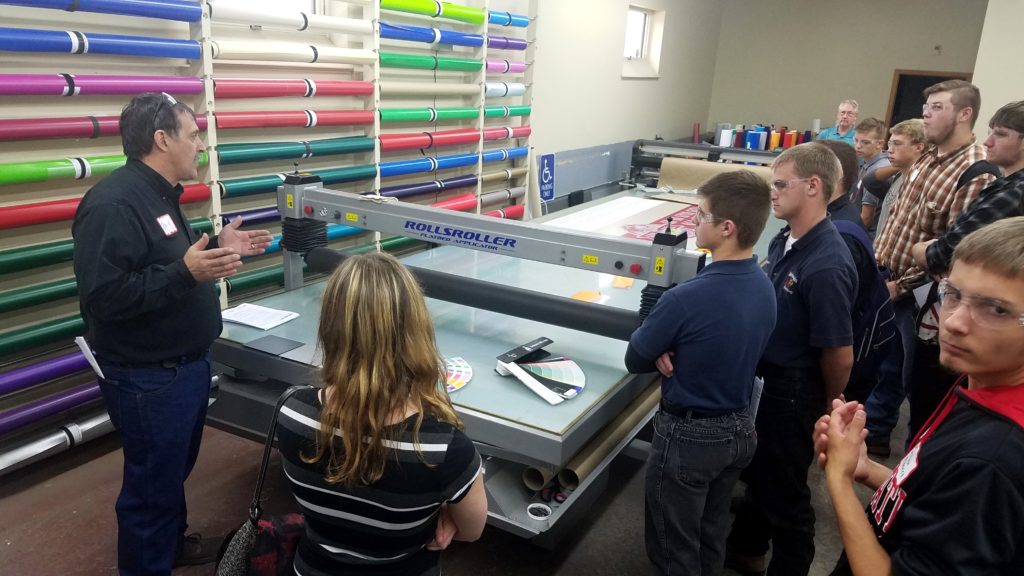 Operations Manager Bruce Tokar talks about the many benefits of colored and printed vinyl. 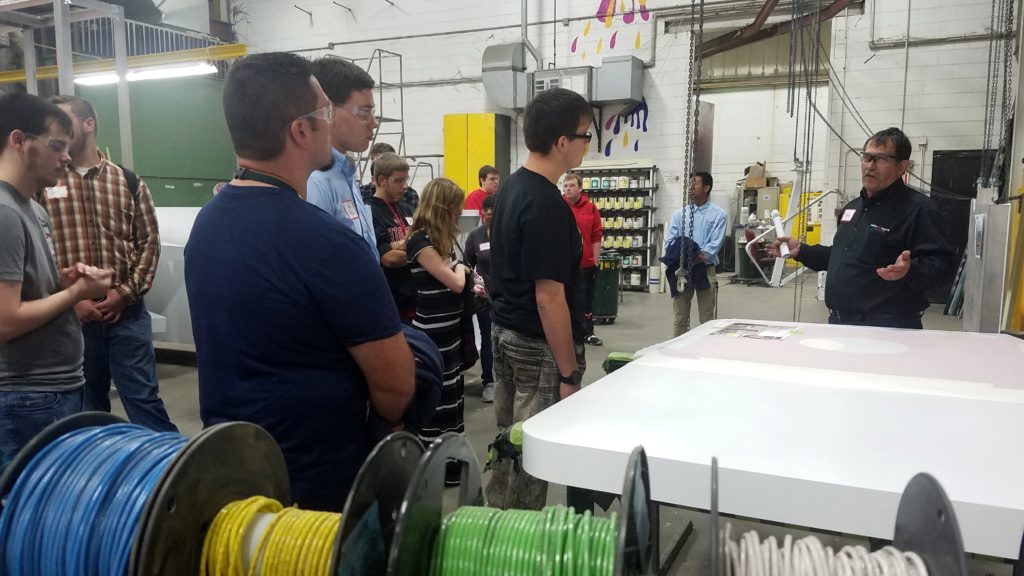 Bruce Tokar shows off a masked and painted Domino’s sign that is nearing completion and installation. 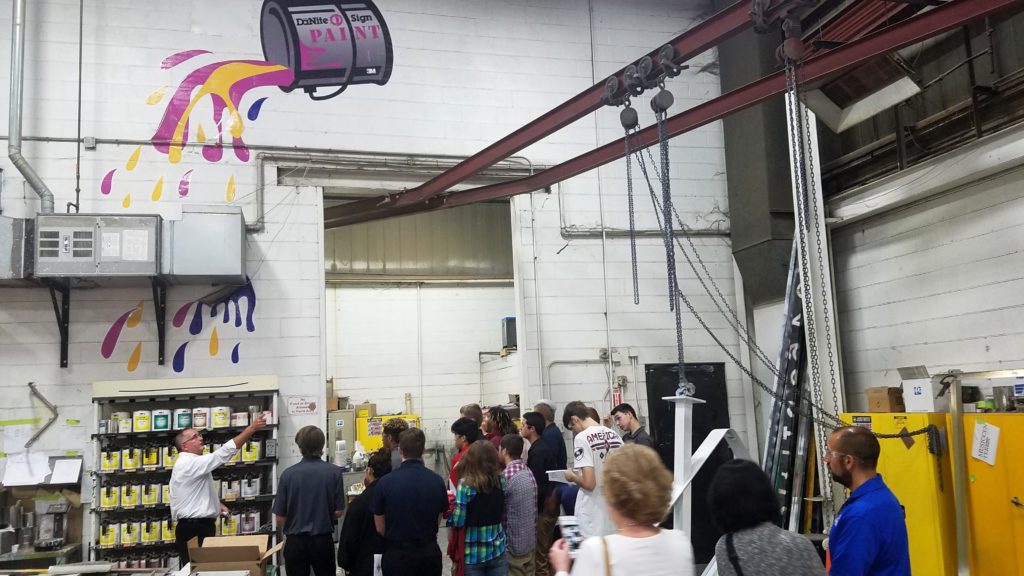 DaNite owner Tim McCord takes a second group of students on the shop tour, describing how signs are moved by overhead crane and rail system in to the paint booth.

After past Sign Manufacturing Day events, DāNite Sign has taken on some of the most inquisitive and engaged senior students on the tour as shop interns. In December of 2016 an eager welding student from Southwest Career Academy began an internship with DāNite Sign Company, learning sign fabrication in the shop. In 2015, another senior graduate went from intern to full time employee. With a shrinking percentage of skilled labor in the workforce today, and considering the level of skill that it takes to create custom signage, ongoing outreach to high schools and career centers remains an important tool for early mentoring, and ultimately staffing in the signage business. 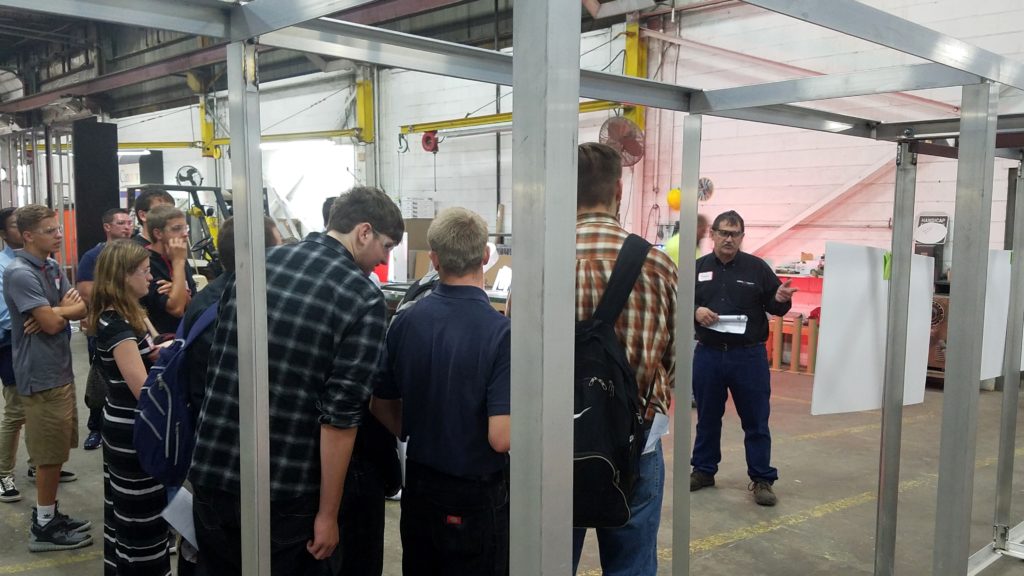 Many of these students are on a career path to commercial welding. Fabricating frames for sign cabinets could feasibly be in their future. (We hope!) 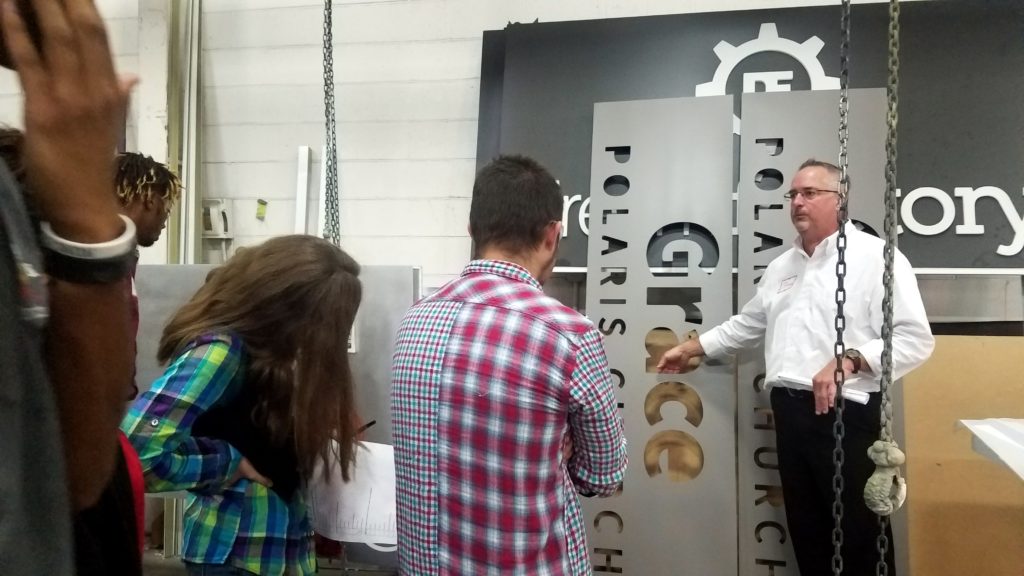 Routed aluminum with push-thru letters are often used in sign fabrication, but not often seen in this early stage of completion. 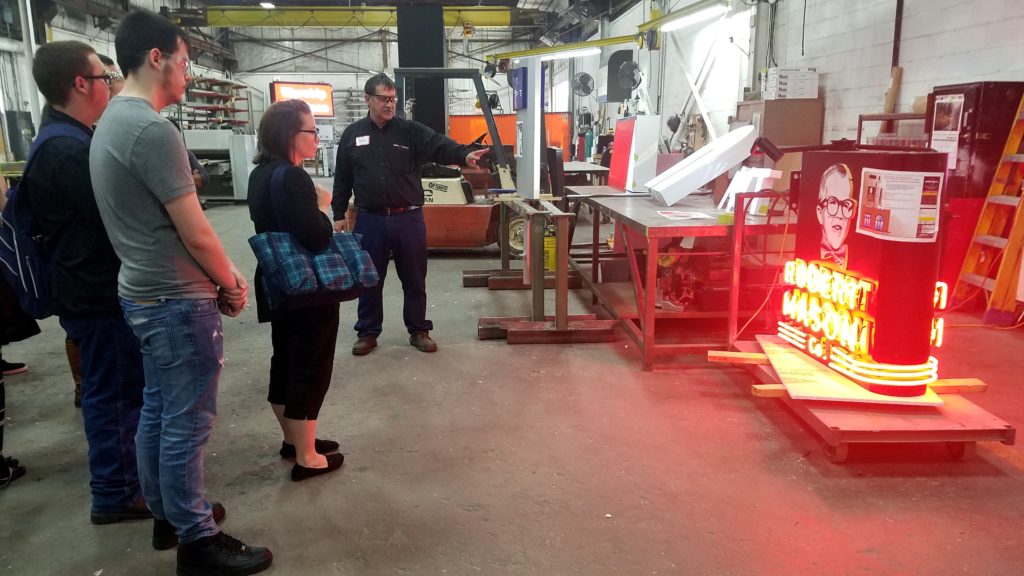 At the end of the tour DāNite fed the hungry students lunch. They ate a half dozen of the enormous 30″ D & E-Z-O’s Destroyer pizzas, (apparently high school students can really put away some pizza), then posed for group photographs in a grounded crane basket against a printed backdrop from a DāNite installer’s image atop the AEP building. 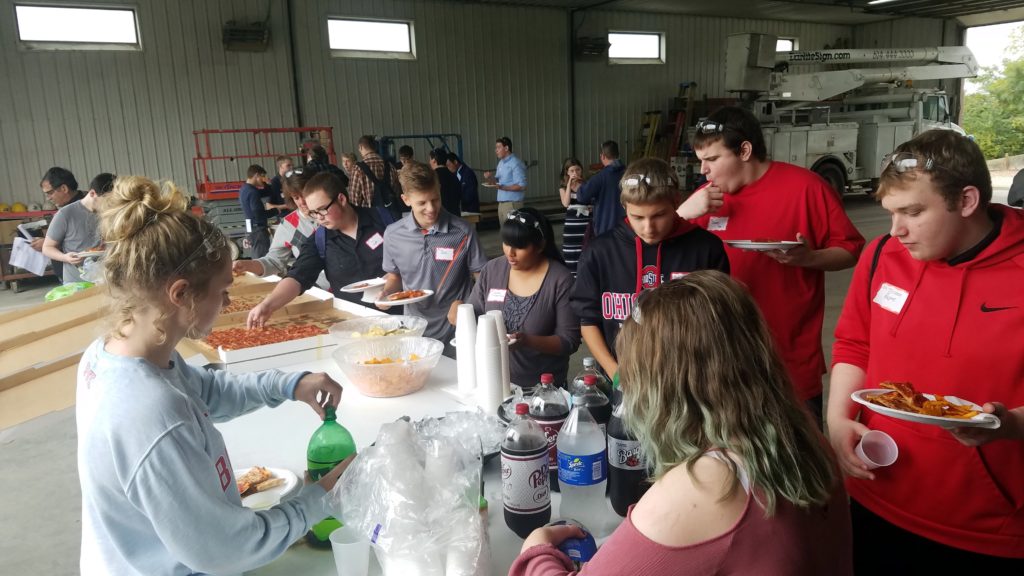 Giant 30″ pizzas and two liters of soda round out the tour in the DaNite truck bay. 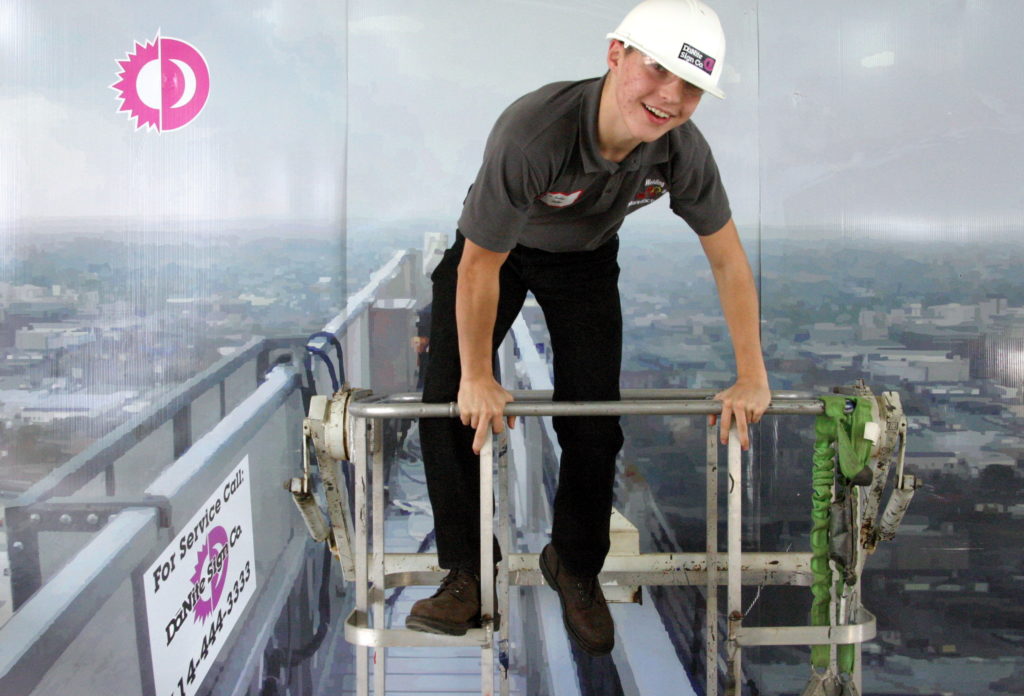 Students got to pose in a grounded crane basket, in front of a backdrop made from a techs picture taken at the top of the AEP building. 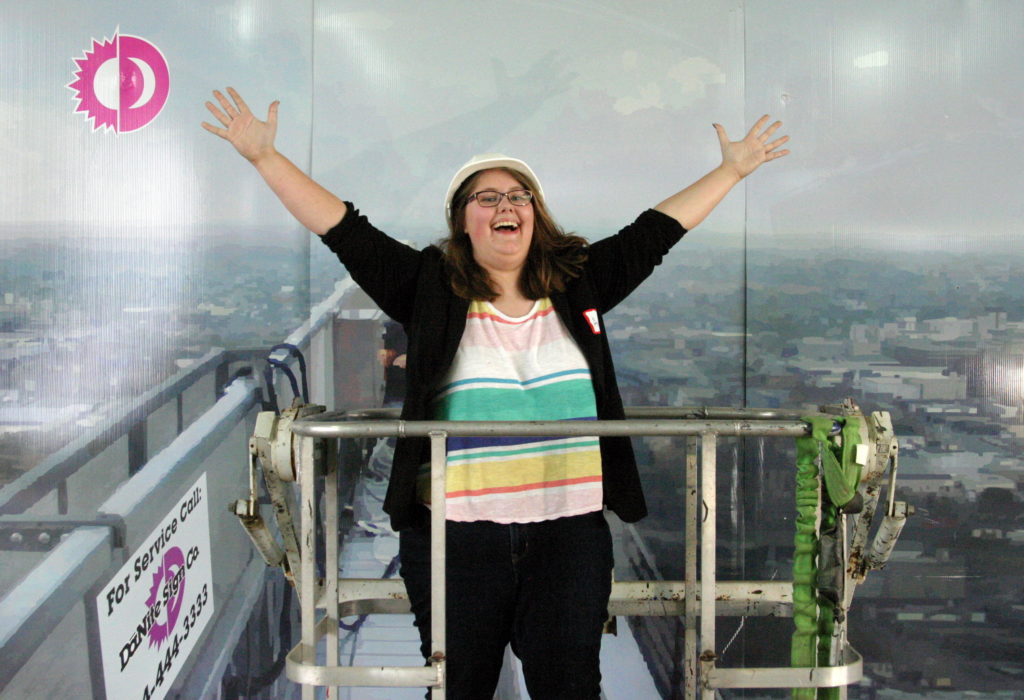 DaNite Designer Anya Greenslade gets in on the picture fun as well. (Someone had to go first!)

All in all, the day was educational, filling, and good fun for the students and DāNite employees alike. It’s easy to become numb to a working environment that you see day in and day out, but the palpable excitement that comes from taking almost anyone on a tour of the DāNite shop is enough to remind all of us of how truly fascinating the sign industry can be. Send a group of special trades students on the tour, and the excitement is amplified tenfold because they’re not just interested observers.

They want to participate!

DāNite Sign Company looks forward to continuing this sharing & mentoring tradition for many, many years to come. We are grateful to our partners at the International Sign Association for giving us a platform from which to host such a worthwhile and mutually beneficial event, Sign Manufacturing Day.